Garden of degenerate delights: musings on the art and theme of Dungeon Degenerates

‘I'm not sure that I can get past the art style. It definitely belongs on the side of a purple van with wall to wall shag carpeting’.[1] Dungeon Degenerates: Hand of Doom, the cooperative adventure boardgame co-designed and illustrated by Sean Äaberg and Eric Radey, and published in 2017, is what we may call ‘an acquired taste’ for the boardgaming community. A taste not so much acquired through boardgaming experience as through exposure to and appreciation of the visual production of certain -mostly but not exclusively American- subcultures of the 1970s and ’80s. The board itself is illustrated in bright neon colors, reminiscent of blacklight paintings and 1970s psychedelic rock posters.

As an heir to the tradition of adventuring and monster-slaying customarily found in dungeon crawl games, Dungeon Degenerates both follows and subverts it. As usual, one to four characters embark on a quest for loot or other objectives, while a range of monsters threaten to thwart their plans. This time, however, the heroes are not virtuous warriors but imprisoned criminals who escape their cells and travel around the map seeking to fulfill various absurd missions: deliver a severed murmuring head, re-unite a saint with his relic finger or collect ingredients to make drugs. The player forms a party comprising of such charming characters as the Witch Smeller, the Bog Conjurer, the Bloodsport Brawler, or the Corpse Burner.

On almost every turn, an array of monsters born from (or should we say, vomited out of) the imagination of a modern Hieronymus Bosch have to be dealt with, before the Hand of Doom spreads its evil presence all over the Würstreich. Lord Scrott for instance, one of the villains of the game, has a bird beak, wears a cauldron, and has his feet inserted into ceramic urns, thus directly referencing one of the figures in the Hell panel of The Garden of Earthly Delights.

Dungeon Degenerates is not the first adventure board game that features bizarre heroes,[2] but it certainly is a fresh take on a genre that often suffers from clichés and repetition. With regard to character diversity, it falls in line with other dungeon crawlers of recent years which include female versions of warriors, elves, etc. Like those, Dungeon Degenerates has its own female underground personas, and, to use a Foucauldian figure of speech, it is interesting to note the range of subject positions that are allowed in this tabletop system of discourse.

The game offers a choice of characters who playfully perform various gender roles. None of them has an obvious sexual orientation but there are sexual overtones in their appearance and dressing code. In the case of the enemies, the references to dominance and submission, sadism and torture are pronounced through their outfits, and it is worth noting that sometimes the vestiary preferences of both groups converge.

At first glance, the trait that sets these heroes apart from others of the dungeon crawl ilk is their dubious moral standing. In contrast to the binary fantasy trope of good heroes who fight against the forces of evil, the anti-heroes that the player controls, and to an extent associates with, are lowlife scum, sourced from the margins of society. Small time, opportunistic crooks who oppose powers of a greater evil or occasionally work with them. Upon taking a closer look, one may notice that the society of the Würstreich bears a certain resemblance to the one depicted in Pasolini’s Salò or 120 days of Sodom (1975): a society governed by corrupt aristocracy, violent clergy and abusive officials.

Indeed, what the characters in the game are trying to escape from or eliminate is not just gruesome monsters but also figures of authority: law enforcers clad in Nazi-style leather uniforms, and their guards, followers, and servants. To sympathize with the heroes of Dungeon Degenerates is to assist them in their fight against an oppressive, totalitarian establishment, a regime that seeks to discipline and punish. Destabilization of the status quo may not necessarily be achieved through conventional resistance, however: one of the options presented to the player is to ‘spread the blight’: contaminate the land with a hallucinogenic ‘fungus’ that will ‘corrupt the minds of the populace and plunge the Empire into violence, chaos and death’.[3]

Safe in their fortress towers, the well-guarded aristocracy of Brüttelburg grow more corrupt and decadent with each passing year while those zealous followers of the Holy Order that remain true to their puritan code only become more violent and sadistic. Crushed under the bootheels of these tyrannical overlords, the peasants of the Lowlands meet in secret, forming witch cults and rebel enclaves.[4]

It is this background that sounds like the wake of an anarchist revolt that serves as the canvas for Äaberg’s phantasmagoria. Inspired by the work of comics illustrators Basil Wolverton and Robert Crumb, as well as by the underground poster art of the 1970s, Kustom Kulture, and even the leather fetishism of Tom of Finland, [5] each individual card in the game features an amusingly nasty enemy or a piece of the most unlikely loot. (click the slideshow below: 1. Vintage blacklight poster, 1970s. 2. Robert Crumb. 3. Basil Wolverton. 4. Kustom Kulture. 5. Tom of Finland) 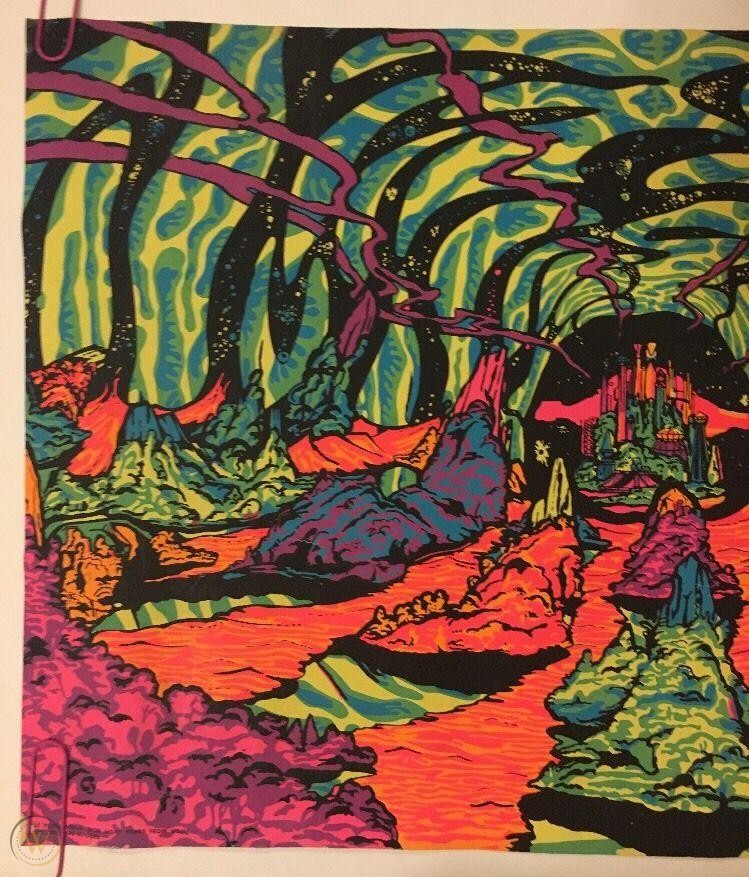 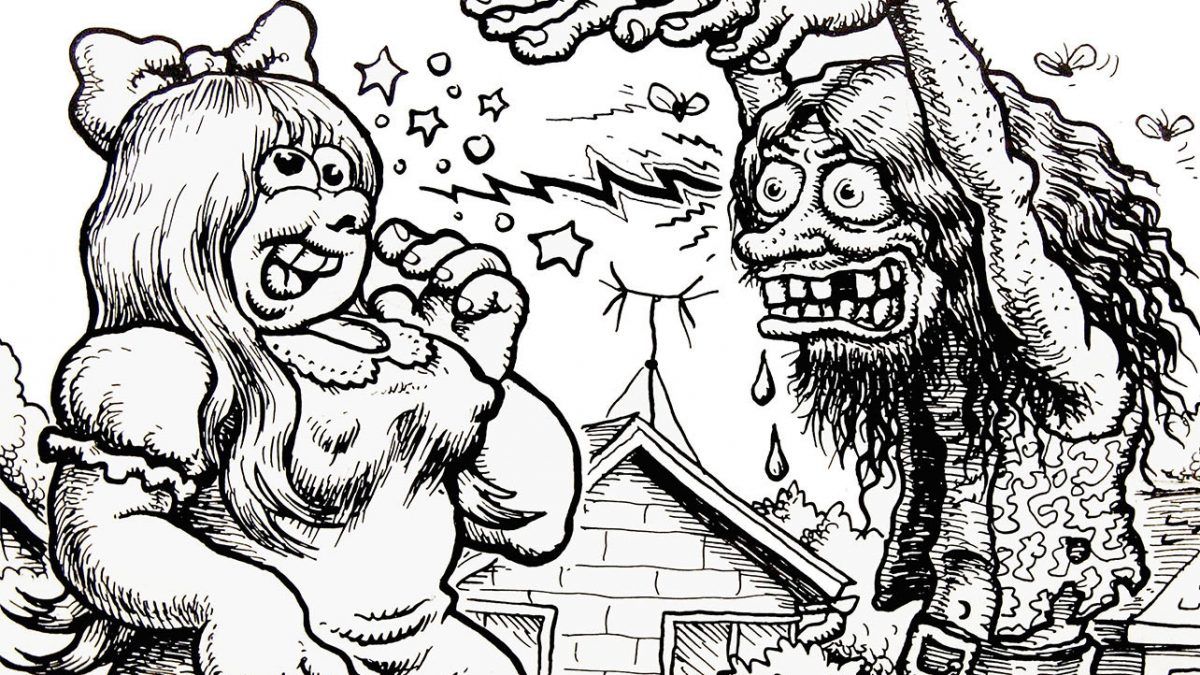 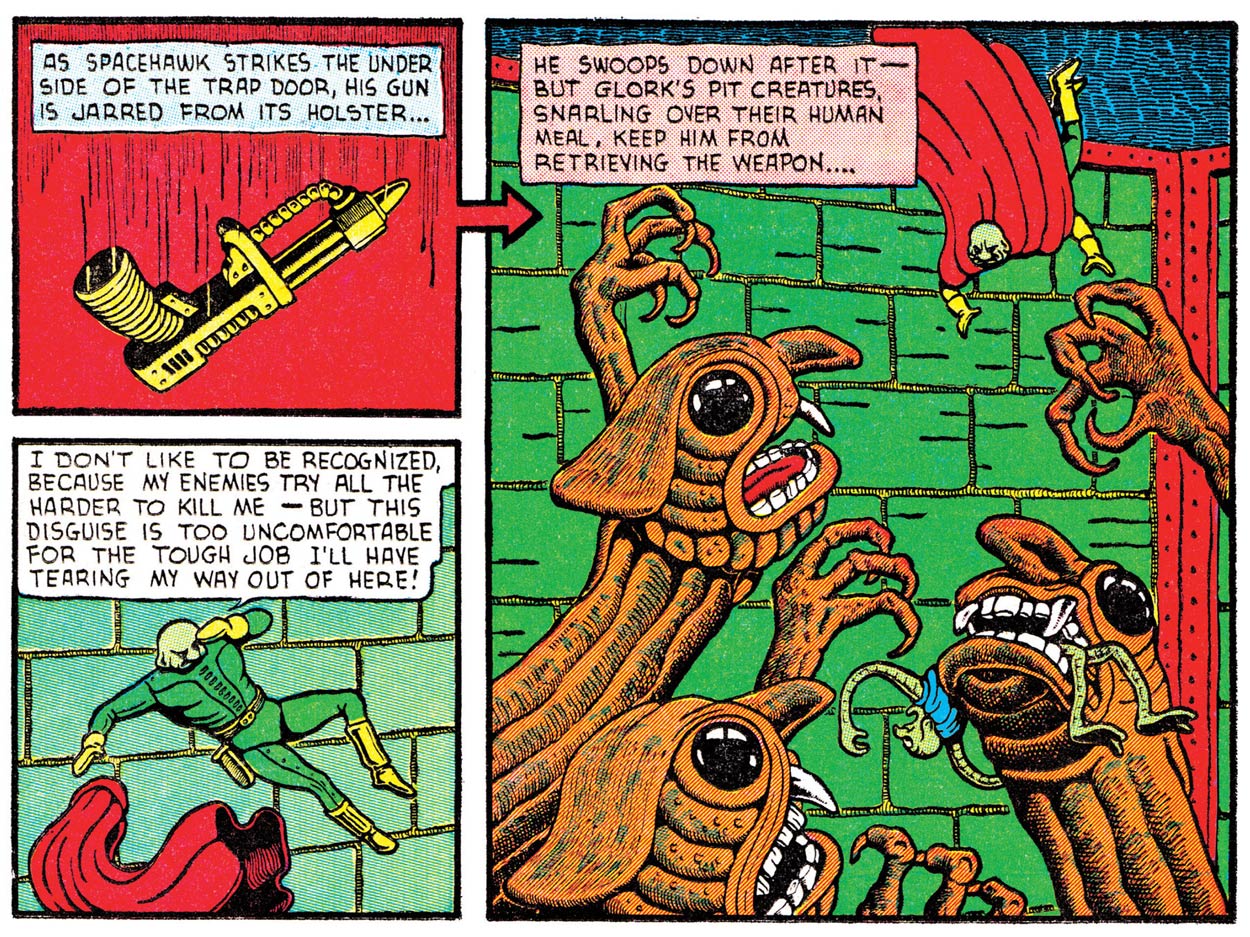 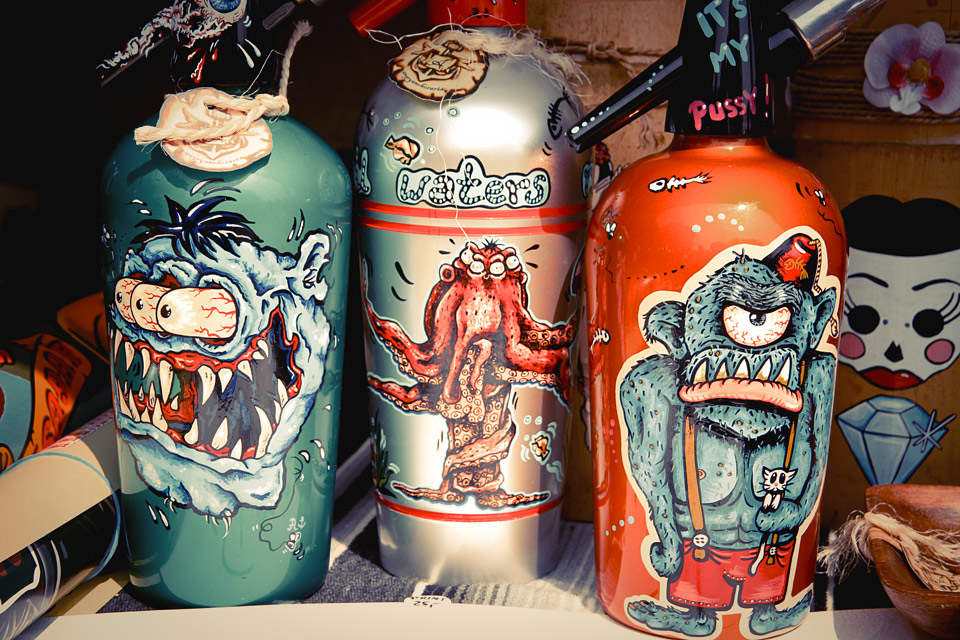 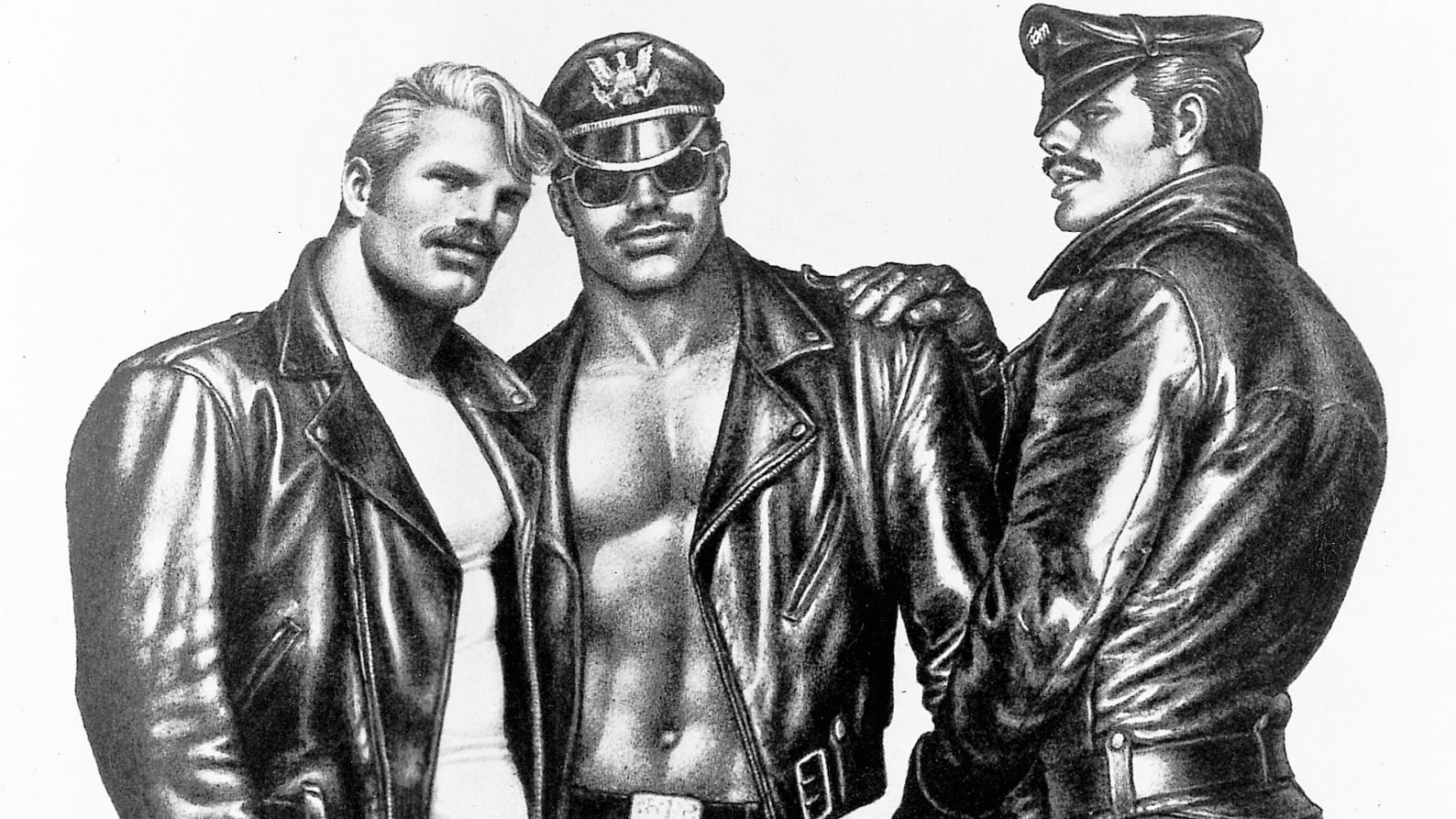 One may still encounter the familiar enemy types of orcs and goblins who are now either guarding the Hand of Doom or bear the insignia of an illicit gang. Dwarves, wizards and barbarians exist as well, only this time they have switched sides: they no longer mirror the player’s ego but instead become incarnations of a nemesis that must be taken out of the way: the menacing members of the game’s symbolic order.

Dungeon crawls are generally not for the faint of heart but this particular one requires a different sort of bravery from the fans of the genre: to dare step out of the comfort zone of mainstream fantasy art and the standard hack-and-slash theme.[6] Even though not set in a dungeon, Dungeon Degenerates descends into ideological depths, and invites adventurous souls to gather the loot of its political meanings and cultural references: itself a distinct meta-game. Besides, the player has been warned: alles hat ein Ende, nur die Wurst hat zwei.

[2] City of Chaos (1996) is one such example but its characters verge more on the grotesque.

[4] Excerpt from the Introduction of the Dungeon Degenerates Missions book.

[5] Information on his influences can be found in the threads that discuss Dungeon Degenerates on boardgamegeek.com and Sean Äaberg’s profile on Wikipedia.

[6] Not entirely, and not necessarily: the game offers ‘silly fun’, if the player chooses to not over-complicate his/her experience.

4. A cartoon by Basil Wolverton: https://www.lambiek.net/artists/w/wolverton.htm

6. Cover art for a documentary film on Tom of Finland: https://crystaleye.fi/ilppo_pohjola/essays/politics-of-the-flesh

Judgement and Wheel of Fortune

Getting through the Gate